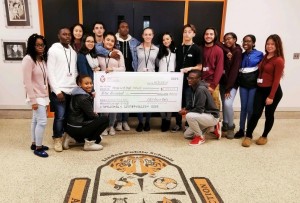 Linden Public Schools came together starting in September to raise money through the sale of silicon wristbands to a help a high school in Texas that was devastated by Hurricane Harvey.

The fundraiser was spearheaded by the Peer Pals class at Linden High School, which focuses on service to the community and setting an example for others. The funds will be given to Kingwood High School in Humble, Texas, which was flooded by Harvey’s deluge.

The students in the class came up with the concept of wristbands, went on a website to design them, and voted on the slogan. The bands are red, white and blue tie-dye, and say: “Linden Public Schools: Humble Enough to Help.” They were sold throughout Linden Public Schools for a donation of $1 or more.

Although this is the first year of the Peer Pals as a standalone class, the group has had a relationship for years with a similar student group in Allen, Texas. The partnership started when students and teachers in Allen reached out to Linden after 9/11 to offer support to a school in the Northeast. The relationship has remained strong ever since.

After Hurricane Harvey hit, the students in Linden reached out their partners in Allen to see how they could help. Allen was not hurt by the Hurricane, but student there were raising funds for the school in Humble, so Linden wanted to pitch in.

“During the beginning days of this initiative, our story made the local news and newspapers, which brought great support from people everywhere,” the Peer Pals statement said. “Through the assistance of our LPS family, local and surrounding communities, and outreach from around the state and country, we were able to raise $3,000! The money collected through this fundraiser will assist Kingwood High School in their efforts to put their school back together.”