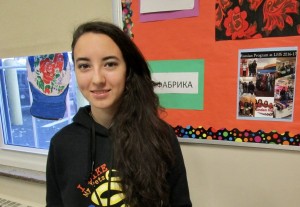 Linden High School senior Joanna Claudia Alzate-Sherksnas has earned the prestigious title of Scholar Laureate from the American Council of Teachers of Russian.

Alzate-Sherksnas is in her third year of studying Russian at LHS and has excelled at each step. For the past two springs she was among the gold medal winners at the New Jersey Contest of Spoken Russian at Drew University and won a bronze medal last year in the National Russian Essay Contest. She’s competing in both contests again this year.

“Claudia is very persistent as a student. She’s very hardworking,” said Bozena Szulc, her teacher at LHS, who nominated her for the prestigious designation. “She’s a very talented, and extraordinary student. She really deserves this award.”

Alzate-Sherksnas said she hopes to go to Rutgers University, where she wants to continue her studies in Russian.

Alzate-Sherksnas was able to master the tricky art of writing in Russian, which uses the Cyrillic alphabet, in which print is complete different than the script version. She credits one on one instruction from Szulc in helping her improve.

“Our class was small last year,” Szulc said, “so I was able to concentrate more on her. But even now, when she’s in a bigger setting, she’s doing very, very well.” 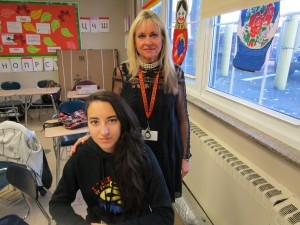 Szulc said not a lot of people know about the Russian program at Linden High School and she’d like to get the word out. She said there are opportunities for Russian students to travel and learn about the culture and the language, but having only a few students makes planning trips harder.

“I would love to take them, because it’s not expensive and it’s a great opportunity,” said Szulc, a native of Poland who speaks six languages and has been teaching at LHS for 27 years. “I have to let students know that there is such a chance.”